Climate change is a hot topic that causes much political strife in the US. Mostly it really comes down to money. Who is making it and who is paying it.

For the moment though, let’s boil it all down to the simplest equation. Let’s ignore all of that scientific consensus and assume that man-made climate change is a 50/50 affair. Toss a coin, it can go either way.

The simplest question is what happens if we are wrong (in both directions)?

First, we do everything we can to fight climate change and it turns out that it
was all a big hoax.

In this case, we spend a whole lot of money to make the world a better place for nothing. Let’s completely ignore that many economists say that switching to renewable energy will create more jobs and economic activity than the fossil fuel industry does today.

There is a cost that we can assign to the fossil fuel industry pollution. Everything from oil spills, to earthquakes caused by fracking, to medical costs related to asthma, cancer, and black lung. Every year, we pay those costs. Even if we take a long time to get rid of fossil fuels entirely, each reduction in the use of fossil fuels will reduce the costs associated with them. It may take a long time, but over time, whatever we spend to switch from fossil fuels will eventually be paid for in the reduction of the costs that we are spending right now. 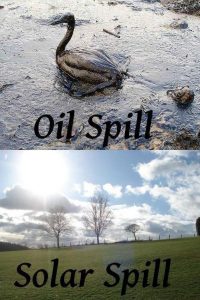 Second, climate change is real and we do nothing.

This is (eventually) the end of civilization as we know it.

The first things that will happen are that we pay an ever increasing amount of money to repair the damage and to fight the results of climate change. Hurricane Harvey that hit Texas was estimated to cost something in the area of $100 billion in repairs and lost economic activity. The costs keep going up when we start getting three or four or five storms like that per year. In addition, we have to put more and more money into the losing battle of sea level rise.

If all of the glaciers and Antarctica melt, the seas will rise by 40 ft. At 40 ft, half of the state of Florida is underwater, along with several other states. Almost every coastal city in the world is underwater. You have 100 million internally displaced refugees in the US alone. Three billion worldwide. Massive food shortages. An apocalyptic world. That might be 150 or 200 years away though.

However, sea levels don’t have to rise that far. At 5 or 10 feet, you still have most coastal cities (and every naval base in the world) uninhabitable. It doesn’t have to be several feet underwater. A city that is 1 inch underwater at all times would effectively be uninhabitable. Imagine how much it will cost if New York, Miami, and Los Angeles, just to name a few, are uninhabitable.

Five feet of sea level change is extremely possible within this century. That isn’t 10 generations down the road when we think we will live in a Star Trek world. That is within the lifetime of our children and grandchildren.

One side of the equation is clearly much worse that the other, including fiscally and economically. Are you so confident that climate change is not real that you are willing to risk the consequences of being wrong?