After the 2016 election, we have Republican climate deniers in charge of both houses of congress and the presidency. Trump has nominated vehement climate deniers to all of his cabinet positions. This puts the country, and the world, in a very precarious position.

Climate change is the single biggest long term threat to both human existence and global stability. People look at the refugee crisis in Europe and think that is a terrible situation. That is from one small country being torn apart by war. Imagine 100 million or more internally displaced people in the US alone. Something like 60% of the world’s population lives within 100 miles of the ocean. For much of that population, that means living below projected sea level rise if the ice sheets and glacier collapse.

The debate about climate change and whether it is man-made has been over for about 20-25 years. The underlying science behind whether it is happening is high school level. There are things that are still being debated. The degree to which climate change affect any particular event such as a hurricane or drought. The timeline for drastic change. How bad it is going to be. 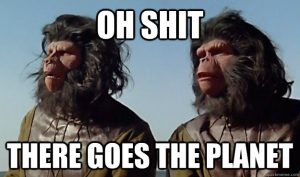 When someone says climate change isn’t real or isn’t man-made, they are saying that a ton of fundamentals of science aren’t real. So much so that it would mean that virtually everything we depend on in life is based on fantasy.

1) You have to say that carbon dioxide isn’t a greenhouse gas. That is a 5th grade science fair experiment. Two jars with different carbon dioxide concentrations, 2 thermometers, and a light source. Just like solid materials, different gasses have different heat conduction properties. Here is a simple way to think of it. If you heat up a metal pan in the oven, within a minute or 2 of taking it out, you can grab that metal pan with your bare hands. Do the same with a glass pan and you will burn yourself. Carbon dioxide is like glass, it retains heat longer.

2) Failing that, you have to say that we cannot measure chemical composition. You might as well throw out pretty much all of modern science, chemistry, engineering, forensics, astronomy, because I am not going to break down how this works to you.

3) The laws of thermodynamics and fluid dynamics. This is the basic principle that if you add heat to a fluid system, it causes motion. If you have forgotten your high school physics class, these luckily come with some common sense anecdotes. Heat rises. Hot things expand. Simple test, put a pot of water on the stove and turn it on, does it boil? You don’t have 90% humidity when it is 0 degrees outside, why? Because cold air doesn’t hold water as well as hot air. Rain evaporates off of your front porch when it is warmer, yes? So makes sense that if we have more heat, we have more moisture in the air. More water in the air means what? More rain. We all think of tropical regions around the equator as having more rain because they are much hotter, right? So if your non-tropical climate became more tropical, would it make sense that you would get more rain?

4) Light reflectivity. As we lose more ice cover, global warming accelerates as ice reflects more light back into space than oceans and land. You should understand this one, dark materials heat up faster than lighter materials. That is why going outside in the sun after a snowfall will blind you. This is why an asphalt road gets hotter and stays hot a lot longer after the sun goes down than grass does.

Failing to dismiss all of those, we get a slate of standard arguments.

However, we have temperature measurements dating back 150 years. There is a linear temperature increase that goes up right along with the increase in CO2 for the last 150 years. Are you really going to tell me that increased sun activity, as an explanation of temperature increase, happens to coincide EXACTLY with our usage of carbon polluting fossil fuels, which is not a linear growth but an exponential one? RIGHT. Did I mention that I have some truly beautiful ocean front property for sale in Arizona?

The earth is too big, we cannot affect it. Guess what, a leaky faucet will eventually fill up a swimming pool. For as large as the earth is, it is a simple question of time. Carbon dioxide absorbs more heat than other gasses. As the CO2 increases, it is like turning your pan from metal to glass. It absorbs more heat and doesn’t release it as quickly. That means that the heat just keeps adding and adding.

Here is a simple way to think of it with math (ugh I know, but I won’t fry your brain).
Base temperature + heat from sun - heat lost to space = new Base

Before the industrial revolution, when we started adding large amounts of CO2, the atmosphere and heat were like this.

Very simple right. Everything was in balance. When we started adding CO2 which absorbs more heat, the equation looks like this.

Oops!!! Based on the above, scientists are saying when we hit 5, we all die. Most anybody can look at that and see that eventually, we hit 5. It isn’t a question of whether you will get to 5. It is a question of when.

Right now, we are plowing forward with adding carbon as fast as we can. Scientists are warning that we are very close to reaching a point of no return. In the example, we add an additional 0.01 with each iteration. Instead, we need to add 0.01 less with each iteration. That does not mean we go back to a balanced equation immediately, that just means that we start the trend adding less and less until we get back to a balanced equation. There is a certain point where even if we reverse the trend, we still go over the proverbial 5 before we get to balance. The scientific debate, at this point, is when we are going to hit that point. Right now, there are dire warnings that point is imminent (10-15 years).

The last argument you will hear is that it is too expensive and will hurt the economy too much. How expensive will it be for the economy when New York city, Los Angeles, New Orleans, San Diego, Norfolk, and almost the entire state of Florida are gone? With sea level rise, those will all become permanently underwater. What economic impact will that have? How much would we consider to be reasonable to spend if there was a terrorist threat to make those places uninhabitable for 1000 years? How many people are in those places that will become internal refugees? That isn’t even counting the increased tornadoes, hurricanes, floods, and droughts that will come with climate change. How expensive are those each year?

Remember that, as with almost any disaster, the rich are the most insulated from the effects. Trump’s cabinet is full of billionaires and rich people who have been paid to deny the science. Think they will have a problem buying a bottle of water during a 5 year drought or catching a plane to get out of the path of a hurricane? Will you? It is easy to deny and ignore when you don’t have to deal with the ramifications.

◀ Russia just kicked our ass, bigly
Why Trump should be Time’s person of the year ▶