Holy shitballs, that is huge!

One thing I have noticed is that people (myself included) really have no sense of scale. We do fine on things that we can actually see, but when something is too big or too small for us to see completely, we very quickly fail to really understand. This even applies to things that we think we understand the size of, like the size of the United States.

The continental United States is approximately 3000 miles from sea to shining sea. When you look at it on a map, it’s decent size. Covers a nice section. Short of going into space, we cannot actually see the whole thing. Because of that, we do mental tricks to really try to grasp it. The US is about a 5 hour flight wide! A city is 3 hour drive from where you are now.

When we talk about things that are really big or really small, we have no mental gymnastics to grasp them. We use shortcuts so that we don’t REALLY have to understand. We write numbers in shorthand or use words so that we don’t have to strain ourselves and think about it or to count 0s. Instead of 1000, we write 1k or 1m for 1,000,000. How about 1 trillion? 1,000,000,000,000. Yeah, its fades fast. At 1 million, we still have a pretty good grasp of things. At least when you are talking about things like like money. $1,000,000 is something we see on a regular basis. At least see on TV and in the news or lottery. How about 1 million miles? That is more than most of us will ever drive in a lifetime. Try to visualize 1 million miles! Can’t do it can you?

It works the same in the other direction also. We’ve all seen some teeny bug and thought how is that thing even big enough to be alive or move? Think about how big a grain of sand is. It is big enough that you can single one out if you really try. How about a grain of salt? You can still see it. How big is a grain of salt compared to a grain of sand? I don’t have a clue. They are both along the bottom end of our visual capacity. Smaller than that and we pretty much lose all concept.

Going to switch measurements to metric. I know, it hurts your brain. We, in the US, being the last bastion of messed up number systems and all. However, multiples of 10s are much easier from here on.

Quick history lesson of 5th grade math (yes, I had to look it up).

Let’s start on the bottom. How big is an atom? They vary in size, but on average 1 angstrom in size or a 10 billionth of a meter. In numbers, that is 0.00000000001. Or to put it in a way you can begin to visualize, how big is 1 atom compared to a hair in diameter? If an atom were the size of a hair, then a hair would be roughly a football field thick. You can visualize that right? A hair on a football field. That is really freaking small.

Now that we have some basic grasp of the size of an atom. How about if we go smaller, into sub-atomic particles? If the nucleus of an atom were the size of your fist, then the electrons of that atom would be about the size of a grain of salt….. floating 1 km away. That is right, at a sub-atomic level, you are like 99.9999999999999999% empty space. Don’t you just love the things you learn on the science channel.

Those get to be really big numbers. Jupiter is about 5x as far from the sun as Earth. Then you see this graphic: 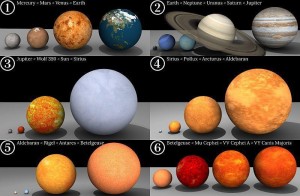 Yeah, kind of mind blowing. The last item is the largest star that we know of, which happens to be in the milky way galaxy. If it were in our solar system, it would extend out to approximately Jupiter.

So moving along, Voyager 1 was launched in 1977 and is the furthest man-made object out there. It has not quite left our solar system. It is traveling through the last layer before entering interstellar space. It is almost 19,000,000,000 km from the sun (at the time of this writing).

Our little neighborhood of stars, known as the Milky Way, is roughly 100,000 light years across. Just one galaxy.

So the known universe is estimated to be somewhere between 27.4 and 150 billion light years in diameter. I don’t understand the math or speculation, but its really big. Lets go with a simple 30 billion (which seems to be more of the consensus I have heard, but probably wrong) and keep the numbers simple. That is 30,000,000,000 light years.

So some quick calculator work:

Holy shitballs, that is huge!

(also note that my math is probably WAAAY off, but in ballpark numbers, you get the picture)

So the next time you are away from the bright lights of the city, go outside, look up in awe, think about 283,815,852,000,000,000,000,000. It is bigger than anything you can REALLY even begin to imagine. The reality is that we are not likely to ever manage to travel 1 light year, much less to another star. But we can always dream. After all that rambling of big numbers that cross my mind from time to time, I leave you with a song!

◀ You might be a birther if….
An open letter to Anjem Choudary about the Charlie Hebdo attacks. ▶